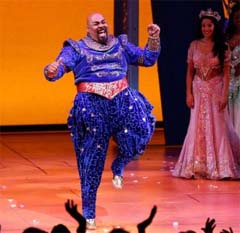 James Monroe Iglehart is talking to himself. And singing. And kicking, and spinning in circles, apparently oblivious to the handful of people surrounding him.

Taken out of context, such behavior might seem troubling. But Iglehart is simply repeating a routine he goes through during each performance of Disney’s Broadway musical Aladdin, in which he plays the hyper-animated , a role voiced in the 1992 animated film by .

The part has earned the 39-year-old trouper, who previously appeared on the in Memphis and The , a Tony nomination for best featured actor in a musical. Anyone who doubts that Iglehart has worked hard to get to this position need only watch him now, in his dressing room, as he prepares for , the eight-minute production number with which he regularly stops the show near the end of the first act.