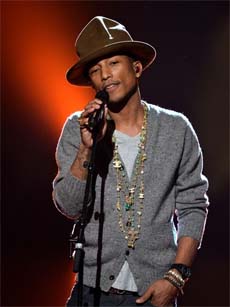 Grammy Award-winning producer Pharrell Williams has previously gotten flak for his comments on race, such as when he told Oprah that “the new black doesn’t blame other races for our issues.” But that didn’t stop the singer-songwriter from voicing his thoughts on Monday’s grand jury decision in Ferguson, Mo., although he said he didn’t want to “get … in trouble.”

In an extensive interview with Ebony, the star wondered why there wasn’t more discussion about why Michael Brown exhibited the behavior he did in the convenience store, which Williams described as “bullyish.”

“It looked very bullyish; that in itself I had a problem with,” Williams said, referring to released surveillance video that allegedly shows Brown forcefully stealing cigarillos from a store shortly before he was fatally shot by Officer Darren Wilson. “Not with the kid, but with whatever happened in his life for him to arrive at a place where that behavior is OK. Why aren’t we talking about that?”

Read the compelte article at The Root.com.