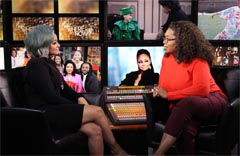 The star of TV’s The Cosby Show and That’s So Raven sat down with Oprah Winfrey and attempted to clarify the misconceptions about who she is. One of the topics the women addressed occurred in August 2013, when the Supreme Court ruled that the ban on same-sex marriage is unconstitutional. At the time, she tweeted, “I can finally get married! Yay government! So proud of you.” Many people saw it as her way of publicly coming out. Asked to explain, Raven replied, “That was my way of saying I’m proud of the country. But, I will say that I’m in an amazing, happy relationship with my partner. A woman.”

“People in my family, they’ve taught me to keep my personal life to myself as much as possible. So, I try my best to hold the fence where I can,” Raven added. “But I am proud to be who I am and what I am.”

Read the complete article at EOnline.com.