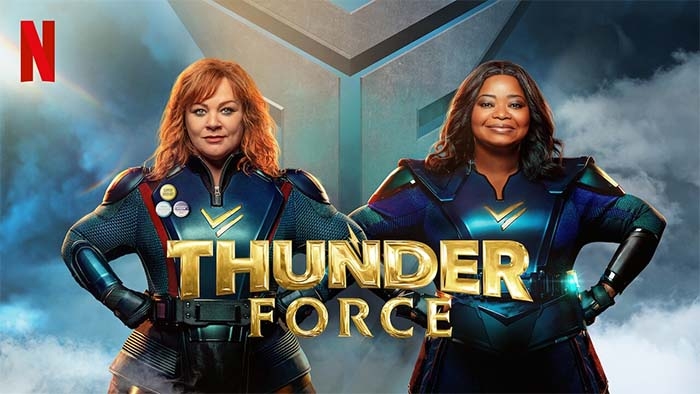 Fifty four interminable minutes into Thunder Force, one of the new Netflix film’s ancillary characters utters the line “How can you not love Thunder Force?”

Starring Melissa McCarthy and squandering Academy Award winner Octavia Spencer, Thunder Force is a farce in the tradition of great Hollywood farces like National Lampoon’s Christmas Vacation and Airplane, This one is a send up of the popular superhero genre, and as a huge fan of films like Black Panther and Wonder Woman 1984, I popped my corn, grabbed my remote, and plopped down on the couch, ready to laugh out loud watching Spencer’s turn at comedy and the raucous slapstick for which McCarthy has become known.

My first laugh didn’t come until 29 minutes into the film, and it was coaxed by a line delivered by another supporting character.

“I am unbelievably bored,” she intoned.

In Thunder Force, McCarthy and Spencer play longtime friends who one day aren’t, then are again. As adults, they become superheroes imbued with the powers of super strength and invisibility, respectively, and they set off to rid the world of the villainous Miscreants. That set up takes far too long, about 41 minutes into the movie.

If you’ve surmised that I was watching my watch the whole time I was “watching” Thunder Force, you’d be right.

The pathetic irony of Thunder Force’s African American woman being rendered invisible while the white chick throws people around and hurls commuter buses down the street wasn’t lost on me. Spencer’s character is also the science wiz who makes it all happen, and I loved that piece of Tinseltown Black Girl Magic. But it wasn’t enough to save this film.

When one of a movie’s principal characters, in this case McCarthy’s, resorts to an extended, lackluster impression of Jaleel White playing Steve Urkel, you know you’re in for a dud.

Director (and McCarthy’s husband) Ben Falcone clearly thought — or hoped — that he had lightning in a bottle with Thunder Force, as he sets up the film for a sequel, or possibly a franchise.

Lighting in a bottle…hmmm. That reminds me of another film that Thunder Force could have drawn on for inspiration. Superhero movies can be funny, too.

But with this flaccid Thunder Force, I found myself hoping that Thanos from The Avengers franchise would pop up as the final credits rolled, snap his gauntleted fingers, and McCarthy & Spencer’s superheroes would just go away.

Thunder Force is available on Netflix…but don’t say I didn’t warn you.