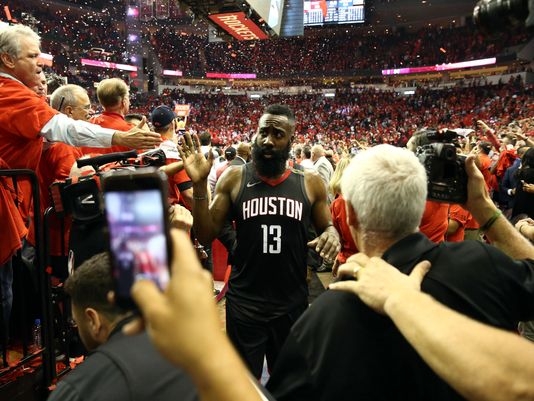 The Rockets find themselves just one win away from a monumental upset of the Golden State Warriors after a 98-94 win in Game 5 of the Western Conference finals on Thursday. Despite giving up a double-digit lead in the first half, and even with nine-time All-Star Chris Paul having to leave the wild game for good with just 22.4 seconds left because of an apparent hamstring injury, Houston fought through it all to push the defending champs to the brink and secure a 3-2 series lead. And as is so often the case with these Warriors, who are known as much for their occasional sloppiness as they are for their unmatched talent, it came down to turnovers.

If they go on to lose this series and have their would-be dynasty derailed, it’s the last of their 16 giveaways that will be talked about for years. With 6.7 seconds left and Houston up one, Quinn Cook inbounded the ball to Steph Curry as he ran near halfcourt. But Curry’s pass-ahead to a streaking Draymond Green on the left side bounced off his hands and knee and into the arms of Rockets guard Eric Gordon.

Game 6 is on Saturday at Oracle Arena, where the Warriors will be facing elimination for the first time since their 2016 Finals collapse against the Cleveland Cavaliers.