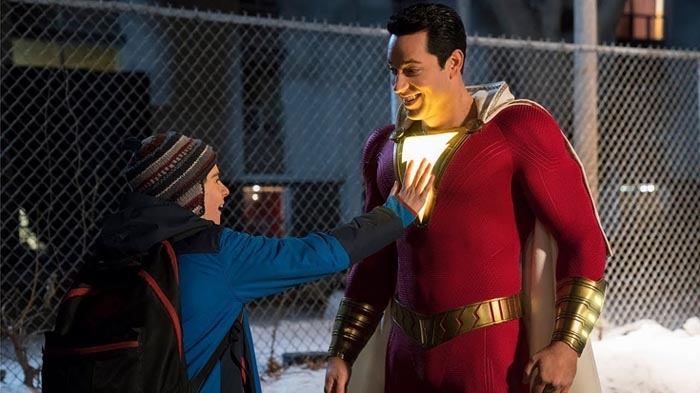 Now THIS is the “Captain Marvel” movie to see!

Yes, I’m old enough to remember when the hero called “Shazam” was the original Captain Marvel.  He was created in 1940 to compete with Superman.  (No, I was not there!) He was even a Saturday morning staple in the 1970s before fading into obscurity.

Due to a decades-old copyright dispute, DC Comics reverted to the “Shazam” monicker for their hero, who was imbued with the powers of the gods which were accessed via the word’s utterance and a dynamic bolt of lightning. In this new theatrical Shazam!, the hero is also filled with the spirit of the 14-year-old kid who gets to call his name. 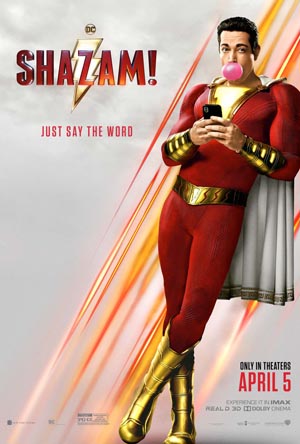 The resulting Superman: The Movie and Big mash-up is the most joyous superhero movie in DC’s current cinematic universe, and one of the best I’ve ever seen.

It takes a first class comedian to make you believe a kid is trapped inside an adult’s body, and Zachary Levi pulls it off with aplomb.  There’s a sequence in Shazam! when we get to see our hero trying to figure out how to use his powers.  It’s the most enjoyable sequence of that type since Tobey McGuire swung into Manhattan high-rises as he tried to figure things out in 2002’s Spider-Man.

Asher Angel plays Shazam’s younger self, Billy Batson, and leads a cast of kids  — including the cutie from NBC’s This Is Us, Faithe Herman — who almost steals the show.  Djimon Hounsou continues to impress with a riveting, almost-unrecognizable turn as The Wizard who empowers Shazam.

But make no mistake about it: this movie is Levi’s.  As with any film of the genre, Shazam! would fizzle out without a believable performance in the tights.  As we’ve seen time and again, it takes much more than a great personal trainer or padded outfit if one’s to be the next Gal Gadot (Wonder Woman).  A great green screen alone just won’t cut it.  An actor has to believe a man can fly before he’ll ever convince anyone else.

As Christopher Reeve first did in 1978, almost singlehandedly creating the modern superhero film genre, Levi’s performance and the sheer thrill he’s having on screen is what really makes this cinematic Shazam! take flight.

Shazam! has more in common with an old-school Indiana Jones flick than any film featuring a caped wonder, be it DC or Marvel, in well over a decade.  Shazam!’s snow white cape and yellow boots were impervious to dirt, for example, much like Indy’s fedora or James Bond’s immaculate dinner jacket…and I loved every second of it.

Shazam! also includes a great family storyline and tributes of sorts to The Goonies and even Unbreakable, which is ironic given the latter film’s upending of the entire superhero movie genre.  This flick could, too, by returning us to a comic book world we actually enjoy.

I saw Shazam! last weekend on a mid-sized screen, and I can’t wait for its wide theatrical release on April 5th.  I need to see it on IMAX, or at least one of the gigantic XD screens.