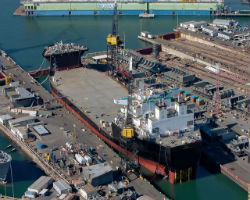 The USNS Montford Point — named in honor of 20,000 African Americans who trained at Camp Montford Point in Jacksonville, NC, from 1942 to 1949 and served in segregated units in the Marine Corps during World War II — was christened Saturday, March 2, 2013, in San Diego, according to an article on LATimes.com.

According to the article, the USNS Montford Point is the Navy’s first mobile landing platform ship, providing 25,000 square feet of space for vehicles, equipment and 380,000 gallons of fuel, reportedly reduce the military’s dependence on foreign ports by allowing for the transfer of vehicles and equipment from ship to shore without docking.