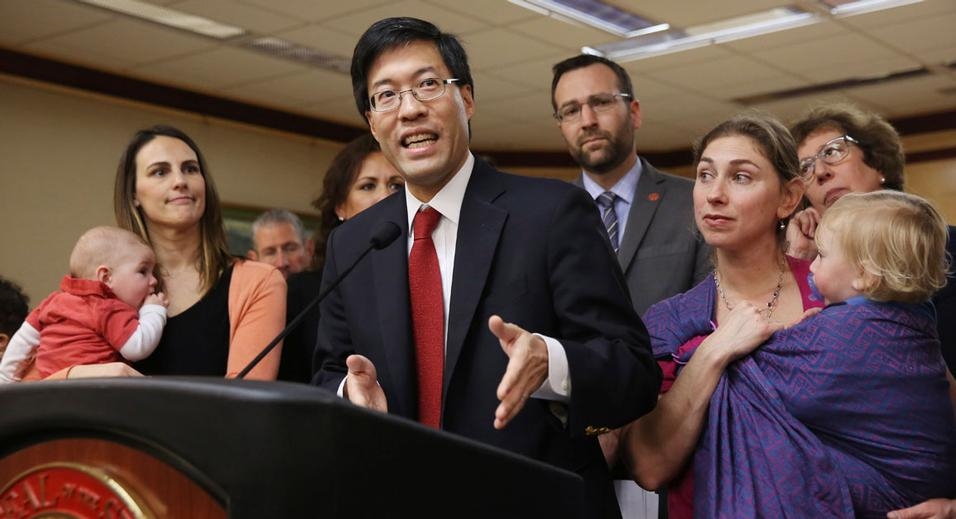 Singer Chaka Khan’s sister, Tammy McCrary, believes there is a link between her 17-year-old son’s Autism and a Measles Mumps and Rubella (MMR) shot a pediatrician gave him when he was a two-year-old toddler. Before agreeing, with reluctance, to the doctor’s recommendation for the multi-dose vaccine, McCrary says she preferred a holistic approach to health. She also didn’t know enough about the ingredients in vaccines to trust injecting her infant with them.

Not long after the doctor gave her son the immunization shot, McCrary says, she began to recognize symptoms of Autism in his behavior.

“It was like someone came and took my baby,” McCrary, who is a Los Angeles-area resident, explains. “His eye contact was gone. Just staring off in space. Not being sociable with others.”

Many health officials, researchers, politicians and citizens who support mandatory vaccinations across the country dismiss McCrary’s claim. They say there is no research to back up what she is saying.

But McCrary is not alone. Her voice is just one among a vocal chorus of Californians and others around the country that includes attorney and environmental activist Robert F. Kennedy, Jr. and former NFL Player Nick Ferguson. Their concerns focus on what they believe are dangerous side effects caused by multi-dose vaccines and by specific ingredients — like aluminum, formaldehyde and “trace amounts” of mercury — in vaccines. They are not opposed to vaccinations in general, most say. They do, however, question the number of vaccines and how early in life they are given.

State Senators — led by Senators Richard Pan (D – Sacramento) and Ben Allen (D – Santa Monica) — have been on the front line in mandatory vaccinations for children in all daycares, nursery schools and public and private schools, and are pushing for it to become law.

The pending legislation worries McCrary and other parents who still have many unanswered questions about vaccines. They worry that the state may soon take away their right to opt out or delay any immunization shots. Some parents argue that the public simply does not have enough scientific proof about the safety of multi-dose vaccines and the vaccination schedule, which requires that multiple vaccines be given in a single doctor’s visit.

Senate Bill 277, if signed into law by Gov. Jerry Brown, will require all children in the State to receive multiple vaccine shots related to 10 childhood diseases including hepatitis B, mumps, measles and chickenpox before entering kindergarten or before attending any daycare setting. The only exceptions would be medical.  Only children with severe and life-threatening allergic responses and compromised immune systems would be excluded. However exemptions based on personal and religious beliefs – which are currently allowed – would be removed.

On May 14, the measure was approved by the California Senate by a vote of 25-11. It is now waiting to be heard in Assembly Health Committee (no date scheduled).

What Supporters Are Saying

Sen. Pan, co-author of the bill, says SB 277 is important because Californians need to be protected from preventable diseases like measles and whopping cough. Lawmakers drafted the bill after state health authorities traced a measles outbreak late last year to visitors or employees infected with the disease at Disneyland in Anaheim.

“This is a good public health measure,” Pan said. “The science is sound. These vaccines are safe and they work.”

Opponents of mandatory vaccination disagree with Pan. Many state that children with vaccine exemptions are unfairly being blamed for outbreaks of whooping cough and measles. They point to statistics from the California Department of Public Health, which they say shows that 90 percent of the 8,215 pediatric whooping cough cases from 2014 occurred in vaccinated children and that only 18 percent of cases in the recent measles outbreak were in school-aged children while other opponents point to safety concerns with the current vaccination schedule.

To back their argument, many of them — including Kennedy who campaigned recently against the bill in Sacramento — believe there is a correlation between the rise in Autism among children, beginning around 1989, and the increase in the number of vaccinations recommended for children in the United States by the CDC around that same time. Opponents of SB 277 acknowledge the benefits vaccinations have achieved historically in our fight against certain serious diseases like polio and smallpox. Yet, they can’t afford to look away from the sticky questions raised by activists who oppose mandatory or strictly-schedule vaccinations.

Vaccination opponents point to another compelling story.  They say the protocols of a landmark 2004 CDC study commissioned to explore the possibility of a link between Autism and the MMR vaccine are also troubling.  Although the study officially concluded there is not a link between the developmental disorder and the vaccine, there is a body of opposing evidence, including a public statement from a senior CDC scientist Dr. William Thompson, Ph.D, who co-authored the study and who has called into question the study’s conclusion. In an Aug. 27, 2014 statement issued by his lawyers, Thompson expresses regret that he and his co-authors omitted information from the published study.

“The omitted data suggested that African-American males who received the MMR vaccine before they were 36-months-old were at increased risk for autism,” he goes on. “Decisions were made regarding which findings to report after the data were collected, and I believe that the final study protocol was not followed.

I want to be absolutely clear that I believe vaccines have saved and continue to save countless lives.  I would never suggest that any parent avoid vaccinating children of any race. Vaccines prevent serious diseases, and the risks associated with their administration are vastly outweighed by their individual and societal benefits.

My concern has been the decision to omit relevant findings in a particular study for a particular sub-group for a particular vaccine. There have always been recognized risks for vaccination and I believe it is the responsibility of the CDC to properly convey the risks associated with receipt of those vaccines.”

Vaccination Safety in the U.S House of Representatives

In Washington, some congressmen like Bill Posey (R—Fla.) are pushing for stricter oversight laws around vaccination safety on the national level. Posey has introduced the Vaccine Safety Study Act,” which acknowledges that “Childhood immunizations are an important tool in protecting children from infectious disease.”  However, it also states “Individual vaccines are tested for safety, but little safety testing has been conducted for interactive effects of multiple vaccines”.

Back in California, McCrary and other opponents continue their fight against SB 277. The differences in opinion that split those who support and oppose mandatory or delayed vaccination for children in the state remain. And as the government, manufacturers and some public health advocates insist vaccines are safe, many parents believe they need to see more data that convinces them about the safety of vaccinations.

As for Dr. Thompson, he also states “there are still more questions than answers, and I appreciate that so many families are looking for answers from the scientific community.”