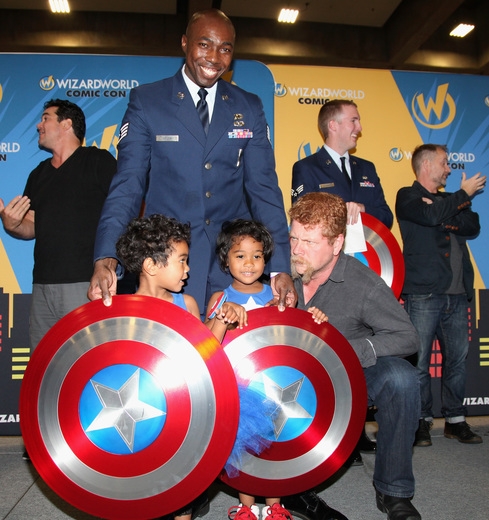 Wizard World, Inc., the predominant producer of Comic Cons across North America, kicked off the three day event yesterday by honoring Hometown Heroes, in partnership with Travis Air Force Base, at the Sacramento Convention Center.

Wizard World CEO John Maatta, COO Randy Malinoff, and all-star talent honored these service members who have gone above and beyond in the line of duty. Talent included Michael Cudlitz, known for his role as Sergeant Abraham Ford in the hit TV series The Walking Dead; Caroll Spinney, the voice of Big Bird and Oscar the Grouch; Dean Cain, who played Superman in Lois & Clark: The New Adventures of Superman; Billy Boyd from The Lord of the Rings trilogy; and “The World’s Largest Athlete,” WWE Superstar, Big Show.

Highlights included comments from Cain, who before introducing one of the service members said “I got to play a hero on TV, but that was make-believe.  These are REAL heroes.”  Caroll Spinney was also a crowd favorite, sharing memories of meeting the legendary Jim Henson and ending his speech with the voices of both Big Bird and Oscar!  Big Show’s presence alone drew cheers, as he dwarfed most of the servicemen and repeatedly referring himself as “the fat guy.”

After individual tributes, each service member was presented with a full scale replica of Captain America’s shield.  Those shields were the envy of everyone in the audience — and some of the presenters!  Before his presentation, Big Show said “This is SO cool!  I want to keep this!” 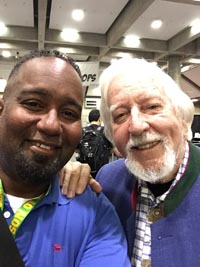 TRUTH TALK:  I almost lost it when I met Spinney, and got to thank him for the childhood memories with Big Bird and Oscar.  I was a part of Sesame Street’s first “class” in 1969!  He had wonderful memories to share of meeting Jim Henson.

Wizard World Comic Con continues throughout the weekend at the Sacramento Convention Center, and offers a variety of gaming and shopping experiences, chances to interact with talent including the aforementioned, Star Trek’s William Shatner, baseball’s Reggie Jackson and others.

For more information about the event, go to http://www.wizardworld.com/wizcon.html

See you this weekend!