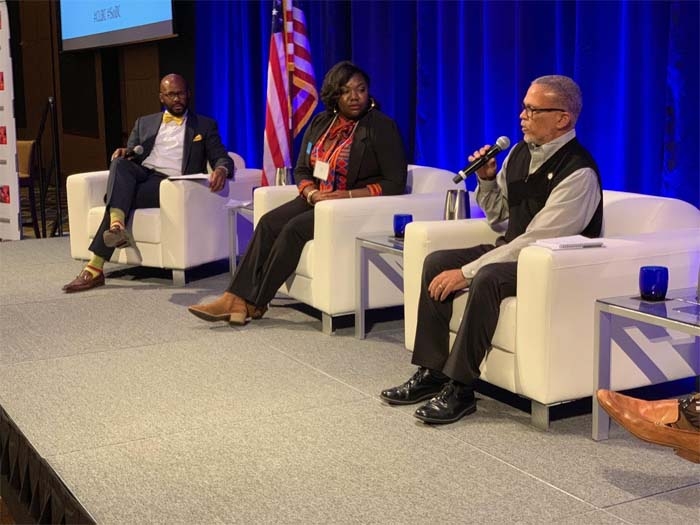 On Saturday, Feb. 8, the California Legislative Black Caucus (CLBC) in partnership with the Ralph J. Bunche Center for African American Studies at UCLA hosted a daylong series of panel discussions titled the “State of Black California” in Los Angeles.

African-American members of the California state Assembly and Senate served as moderators of the discussions that covered education, public safety, civic engagement, economic empowerment, political organizing and the upcoming 2020 census.

“We need your support. For us to be successful and do the all the things we do in the state legislature, we need you to back us,” Assemblymember Shirley N. Weber (D-San Diego), who is chair of the California Legislative Black Caucus, told the audience.

About 200 people attended the event held at the Meyer and Renee Luskin Conference Center on the campus of UCLA.

Weber thanked the audience for attending the “State of Black California” and encouraged African Americans to get engaged in politics at the close of the conference themed “Building a Bench.”

The CLBC invited panelists from different walks of life in California to talk about the work they are involved in, and how their efforts help to improve the lives of African Americans across the state.

“I long for the day when Black people have the luxury to not engage. Black people need government as our employer, as the educator of our children, as our health care provider, as our houser, as our CalWORKS provider, as our SNAP provider,” said Senator Holly Mitchell (D-Los Angeles), speaking at the conference. Mitchell represents the 54th Assembly District  which includes Culver City, Exposition Park, Ladera Heights and parts of Crenshaw, downtown and Florence.

“We still rely on government, good, bad or different,” Mitchell pointed out.

Every year, the members of the California Legislative Black Caucus provide funding through the state for the Ralph J. Bunche Center. The research institution at UCLA is named for the African-American diplomat who grew up in Los Angeles and was the first person of African descent to win the Nobel Peace Prize.

“I’m always encouraged when I attend the “State of Black California,” said Regina B. Wilson, Executive Director of California Black Media, who spoke on a panel that explored the obstacles and opportunities California faces as it prepares for the 2020 Census, which begins April 1.

“I joined Kevin Cosney, who is strategizing and working in the trenches with the group ‘My Black Counts’ to help increase Black participation in the 2020 Census,” Wilson said.  “We had a chance to inform the audience about some of the ways they can get involved to help prevent a census undercount in our communities.”

In 2018, Gov. Jerry Brown appointed Wilson to serve on the California Complete Count Committee for Census 2020.

“The dollars that we deserve that we have over generations been denied, we have an opportunity every ten years to claim that,” said Assemblymember Sydney Kamlager (D-Los Angeles). She  encouraged the audience to mobilize their friends, family members and loved ones to complete census forms this year.

“You meet Black Californians — as well as our friends and allies — from so many different disciplines and from different parts of state. We connect, share ideas, pat each other on the back, and imagine a way forward that continues the legacy of so many that came before us,” said Taisha Brown, chair of the California Democratic Party African American Caucus.