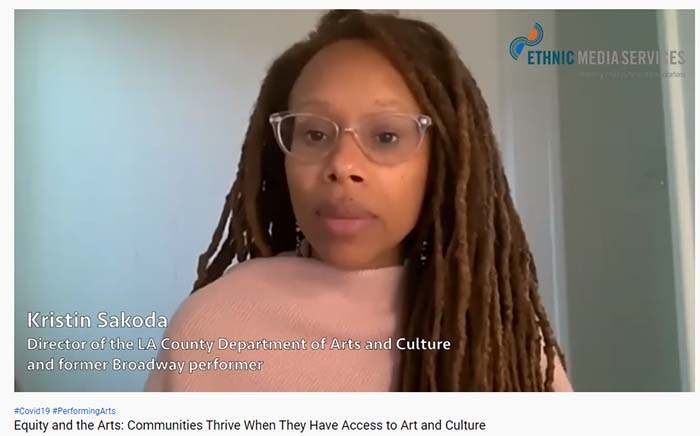 The COVID-19 pandemic has largely decimated the arts scene in California, wiping out local theater companies, many of which offer a cultural lifeline to their communities.

“Theater is a place where people see themselves, hearing words they can relate to. We can talk about their issues, talk about their dreams, and give them some sort of cultural relationship to the world,” said Jose Luis Valenzuela, artistic director of the Los Angeles Theater Center, at a Sept. 11 briefing organized by Ethnic Media Services. Learn more at: https://www.youtube.com/watch?v=n5gn8Od7-og

Even before shelter-in-place orders were mandated across the state, many live performance venues had already curtailed their calendar of events, mindful of community spread in enclosed spaces which did not allow for social distancing. Museums have also been shuttered since early March, and speaking and literary engagements have also been canceled.

Nationwide, the arts sector lost about 12 billion in revenue. Los Angeles County — home to the most vibrant arts scene in the country with more than 200 museums and art galleries, 300 theaters, and hundreds of live music venues — has suffered a $20 million loss in arts revenue over the past six months, said Kristin Sakoda, director of the Los Angeles County Department of Arts and Culture, at the EMS briefing.

50 percent of arts organizations in the county are worried they will not survive the pandemic, she said, noting that many have had to furlough or lay off staff.

Even before the pandemic, most arts organizations were under-capitalized, said Sakoda. “A lot of community based organizations or smaller budget organizations that really reflect and serve communities of color often don’t have the same access to donors or to large amounts of capital.”

“We can’t turn away from art. We need the Arts to be part of recovery efforts,” said Sakoda, pointing to studies that showed correlations between cultural resources in communities and better public safety, education, and health outcomes.

The Los Angeles County Department of Arts and Culture is using $10 million of CARES Act funds to distribute as grants to small and mid-size arts venues.

The U.S. is home to about five million artists, the majority of whom found themselves unemployed as the pandemic hit. Comedienne Kristina Wong, who has been performing her one-woman show “Kristina Wong for Public Office,” was one of the newly unemployed.

The performance artist, who riffs on President Donald Trump’s miscreant behavior as part of her act, said that she was performing at a community college in Sacramento. A half hour before her show was scheduled to end, students got a text message on their phones stating that classes would go online the following day.

“I had lined up a whole national tour, which was postponed. And suddenly, I had no income,” she said.

Wong has adapted, in the manner of many arts venues, moving her show online from her home. “You know I could have had today’s rally on tour in Hawaii or New England where I was supposed to actually be this week, but I was like, you know what? No, thanks. Give me an audience that’s curled up in bed, or sitting upright at their desk at home, putting their kids in the other room during a global pandemic, because they are the audience now,” she joked.

Being able to monetize the show has been difficult: Wong is facing the challenges many arts venues are struggling with as they move their content to a digital format. Some have had success with virtual donation buckets, while others are offering a series subscription, with added perks for subscribers.

The comedian received a small Paycheck Protection Program loan via the Small Business Administration, which has allowed her to stay afloat, and amass an army of volunteer seamstresses who sew face masks for low-income communities.

Valenzuela of the Los Angeles Theater Company, said PPP loans and other small, emergency grants, will not allow him to keep his theater company afloat. “I’ve got a $10,000 a month lighting bill at LATC,” he said, noting that he has received only one grant worth $22,000. Valenzuela has 14 staff members. “We will have to let them go,” he said, noting the current lack of work and the uncertainty of when the company will be able to perform again.

“Many of the small theater companies will not survive this crisis,” said Valenzuela.

The LATC has been performing for 35 years. It is one of four Latinx theater companies in a region where more than half the population is Hispanic. When the pandemic began, Valenzuela was working on a play about immigration.

Graphic designer Roberto Pozos is working with the newly-formed Equity and Justice Coalition to highlight the impact of the pandemic in Calexico, which is in Imperial County, one of the hardest hit regions in California. At the height of the pandemic, 23 percent of residents — almost one in four — had tested positive for COVID.

Pozos is organizing a virtual show featuring the work of volunteer artists which will run from Sept. 28 to Oct. 2. Works of all sorts, including posters and poetry can be submitted via a website. Pozos said he is encouraging anyone with a connection to the Imperial Valley to submit their work.

The exhibit will kick off with a poetry night on Sept. 24.

“Here is an opportunity for us as artists to say Imperial Valley is resilient. We’ve been through a lot. We all have disparities. But we will prevail, we will come out of this, and we want to give people that hope,” said Pozos.