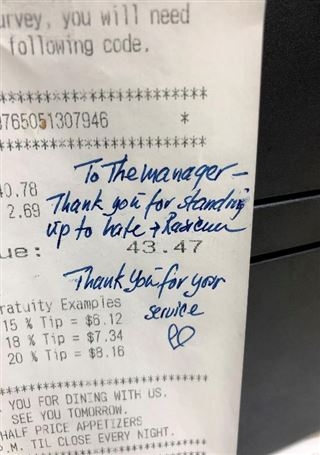 A former supervisor at an Applebee’s in New Jersey is suing the restaurant chain, alleging she was fired after she asked a bar patron who made derogatory comments about Muslims to leave.

The woman, Amanda Breaud, claims in the lawsuit, filed Tuesday in state Superior Court in Monmouth County, that in January 2019, she was temporarily transferred from an Applebee’s in Tinton Falls to one in Middletown, where she “was exposed to a hostile work environment where racism and bigotry were commonplace.”

The lawsuit names Applebee’s and the franchisee of the Middletown location, Doherty Management Services, as well as a general manager, a senior manager and a bartender, as defendants.

She said that on one occasion, when an African American employee’s uncle died, the manager said, “Well, this is one less black guy we have to worry about.”

In a separate incident, the same manager called an employee “a f—— retard” in front of other staff members, Breaud also claims.

For the full story, visit NBCNews.com.