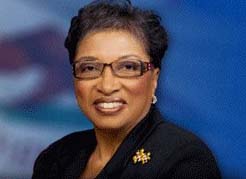 “I’m very proud to recognize small business owner Linda Gonzalez as my Woman of the Year,” said Assemblymember Brown. “She’s been a dedicated leader in the Inland Empire region for over thirty years. She was recently elected to the West Valley Water District of San Bernardino County. She broke the proverbial ceiling when she was appointed as the first Latina president of the Bloomington Woman’s Club in 2010. Most notably, she served as chairwoman and board member of the Bloomington Municipal Advisory Committee (MAC) for thirteen years, and as vice chairwoman of the Colton Joint Unified School District Measure G Committee. She’s always giving back and I just want to recognize her for the great work that she’s doing to enhance our community.”

Gonzalez has owned MAS Auto and Truck Electric for over 25 years. It’s currently based in Fontana. The company specializes in rebuilding alternators, starters and generators.

She’s involved in several boards and committees including the Democratic Women’s Club of San Bernardino, the Inland Empire Hispanic Chamber of Commerce and the SANBAG West Valley Community Advisory Group. Formerly, she served as a board member of the Fontana Area Chamber of Commerce.

Gonzalez was nominated by her son, Thomas Gonzalez. “It’s a privilege to nominate my mother, Linda Gonzalez, for Woman of the Year. She is a mother, a Latina, and equally important, a woman who gets the job done. As a mother, she is an inspiration to her children. During family dinners, my mother always instilled in us that true happiness is found in helping others. Her commitment to community service has compelled me to give back to my community and help those who are often overlooked. My mother is my hero.”

Gonzalez has been married to her husband for twenty eight years. Together they have four children and one grandson. When free time is available, she enjoys spending it with her family and friends.