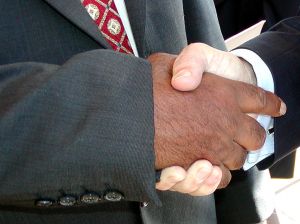 According to the article, the US economy added 146,000 jobs in November and the overall unemployment rate fell to 7.7 percent, reportedly the lowest since December 2008.

And the black unemployment rate also declined, from 14.3 percent to 13.2 percent.

The article says hiring remained steady during Hurricane Sandy and with looming tax increases, but the government said employers added 49,000 fewer jobs in October and September than it initially estimated.