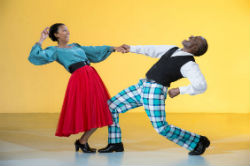 The California Shakespeare Theater (Cal Shakes) will present “Spunk” from July 4-29 at the Bruns Amphitheater in Orinda.

“Spunk” features three stories by the great Harlem Renaissance writer Zora Neale Hurston that have been adapted into a theatrical play by George C. Wolfe, who won an Obie for its 1989 off-Broadway premiere production. A trio of vignettes of African-American life in the first half of the 20th century, “Spunk” is a raucous, charming, blues-infused look at love, revenge, jealousy, and the fine art of the hustle.

Click here for more information and to purchase tickets.