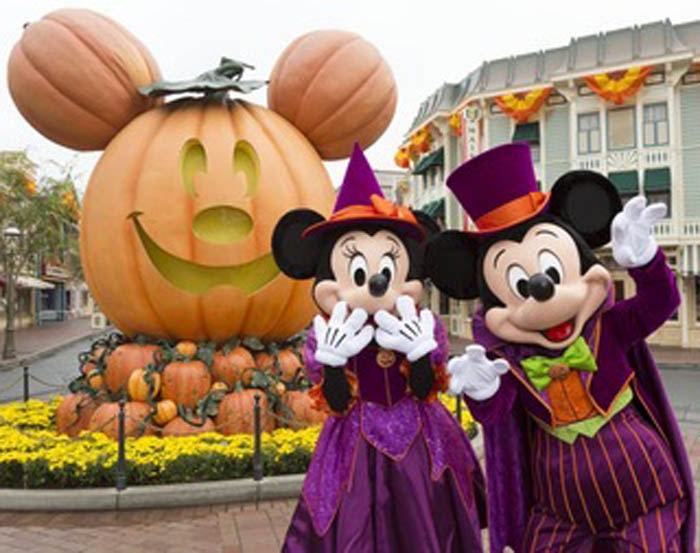 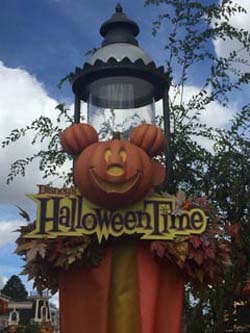 Halloween is big business these days.  Several different seasonal retail shops are open through early November, offering a variety of holiday fare.  Increasingly, those items target the more terrifying aspects of the holiday.

It’s a far cry from the pre-slasher movie Halloweens of my youth, when the day was only about praying that rain would’t dampen trick or treating, and determining which one of us had mined the most door-to-door candy.

Even theme parks have gotten into the act in recent years, as our Halloween observances have gotten more and more macabre.  Chains like Six Flags, Universal Studios and others now offer stand-alone events that are designed to scare the bejesus out of us.

With the shift in the focus of Halloween over the years, I was surprised to learn that Disneyland, the self-described “happiest place on earth,” had gotten into the Halloween act.  Could Mickey Mouse and Michael Myers coexist?  Just how frightening is a Disneyland Halloween?

In the spirit of investigative journalism, I ventured down to Anaheim to find out.  I’m delighted to tell you that there’s still a place for families with small children to go and have a great, non-terror-induced time. 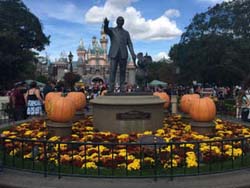 From the moment I stepped up to the gate, I felt the familiar, family-friendly Disney magic, as the entrance was festooned with gloriously orange Mickey & Minnie-O-Lanterns.  The theme ran throughout the park, with lampposts, restaurants and shops having been decorated for Halloween.

The most obvious of Disneyland’s Halloween tie-ins, the classic Haunted House attraction, was the star of the show.  I can recall riding it with absolutely no wait during the summer months, but during my recent visit, as the Halloween season is in full swing, there was a 200 minute wait to ride.  For the mathematically challenged, that’s over three hours!  Thankfully, I had a “go to the front of the line” Fastpass.  I’d advise you to get one, too! 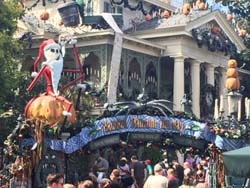 Once you actually get on the ride, Disneyland’s Haunted Mansion is everything you remember and a great Halloween-themed activity.  If you’ve never been on it and you have children (or grandchildren!), put it on your bucket list.

These days, you can’t very well go to Disneyland and not check out its sister park, Disney California Adventure.  Surprisingly, there were very, very few Halloween decorations to be found there, and only a smattering of seasonal souvenirs. 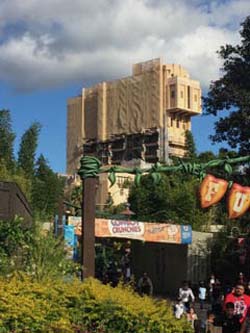 That park’s most Halloween-themed ride, the Twilight Zone Tower of Terror is also everything you remember — but that’s only a good thing if you like being scared out of your mind.  I grapple with a mild case of claustrophobia, so I don’t what possesses me time and again to get into the elevator of a haunted hotel only to be dropped at lightning speed 13 stories to the ground — but I love it!

The Tower of Terror appeared to be even more dressed for the Halloween holiday than it usually is, being draped in tarps and scaffolding as it’s retooled for a 2017 debut as a Marvel-themed Guardians of the Galaxy ride.

Many have expressed concern about the change, with some going as far as signing on online petition to halt it.  Fans shouldn’t be worried.  Change has been a constant at Disneyland since it opened in 1955.  For example, the park’s Pirates of the Caribbean attraction didn’t always feature Johnny Depp’s Captain Jack Sparrow.  I’m certain that next year’s park goers won’t be disappointed with the attraction’s next chapter.  And for those who yearn to return to the Twilight Zone, Disney’s flagship resort in Orlando, Florida has no plans to retool their Tower.

At the end of the day, I’m thrilled that Disneyland continues to provide families with a (relatively!) fright-free Halloween destination.

For information on Disneyland, go to https://disneyland.disney.go.com.