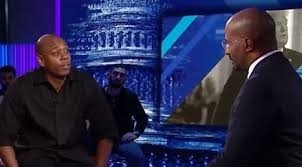 In a forthcoming interview with CNN’s Van Jones, Dave Chappelle spoke to the host about Kanye West’s approval of Donald Trump.

When Jones first brought up Ye, Chappelle jokingly got up from his chair to leave the stage. “First of all, you know, Kanye’s the artist, man,” Chappelle first said, calling him “genius.”

Chappelle continued, “I think the angle he’s seeing things from is about the division that he sees. And he’s not inconsistent with what he’s saying.” He added, “I’m not mad at Kanye. That’s my brother—I love him, I support him. But, you know, I don’t have to agree with everything that he says…I just trust him as a person of intent. But yeah, he shouldn’t say all that shit.”