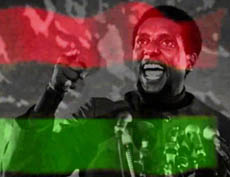 Stokely Carmichael may be best remembered as the man who coined the term “Black Power”. While attending Howard University in Washington, DC, Carmichael was the leader of NAG [the Non-violent Action Group]. By 1964 he had risen to the leadership of SNCC [the Student Non-violent Coordinating Committee], one of the most militant of the civil rights groups and by 1966 had become Chairman. It was at this point that his message of Black Power came to the forefront.
As his message became stronger it was more misunderstood by both blacks and whites, and he was ousted from the SNCC in 1967. He joined the Black Panthers but this marriage did not last long as he was opposed to Newton’s idea of working with whites in the revolutionary struggle. Carmichael left for Guinea, West Africa and renounced his membership in the Black Panthers and the party as a whole.
Source: http://www.pbs.org/hueypnewton/people/people_carmichael.html