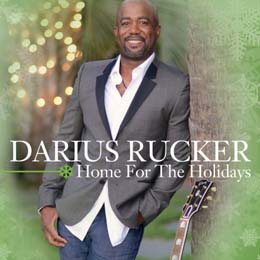 Country superstar Darius Rucker was recently asked, upon the release of his new Home For The Holidays, why the world needed yet another Christmas album.  He said he didn’t know whether the world needed one, but he wanted to make one, so he did.

The album’s highlights include “Have Yourself A Merry Little Christmas” and “I’ll Be Home For Christmas” as well as the more sacred “Oh Come, All Ye Faithful” and “Hark! The Herald Angels Sing”.  Rucker’s chemistry with Sheryl Crow on “Baby, It’s Cold Outside” is playful and flirty and contagious – in fact, it’s one of the handful of covers of that particular song that I really like.

The album’s two original songs, the sweet “Candy Cane Christmas” and the absolutely gorgeous “What God Wants For Christmas” all but assure we’ll be playing Home For The Holidays for many Christmases to come.

I wish Rucker had included the oft-ignored prelude to the album’s closer, “White Christmas”, but he sings the more familiar rest of the song so well that all’s forgiven.  The project’s only real “miss” is “You’re A Mean One, Mr. Grinch”.  It’s a hard song to cover, and not even Rucker’s baritone can match the perfection of Thurl Ravenscroft’s on the 1966 original, from the seminal holiday special.

The world may not have needed Home For The Holidays, but it’ll be a merrier Christmas now that we’ve got it.

Darius Rucker‘s new Home For The Holidays is available on iTunes, at dimple.com, and at retail everywhere.

Michael P. Coleman is a Sacramento-based freelance writer who is often mistaken for Darius Rucker – until he starts singing.  Connect with him at michaelpcoleman.com, via email at mikelsmindseye@me.com, or on Twitter: @ColemanMichaelP