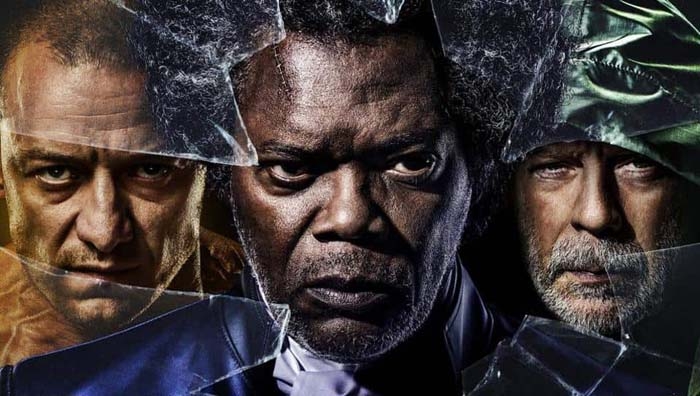 It took director M. Night Shyamalan over 15 years to get around to making a sequel to 2000’s phenomenal Unbreakable, which foreshadowed Hollywood’s fascination with the superhero genre.  As hard as it is to believe, that movie (featuring compelling performances by Samuel Jackson and Bruce Willis) was years before multiplexes were home to big budget movies based on comic books.

Unbreakable holds a spot in my Top 10 movies of all time, and it’s 2016 sequel scared me Split-less.  James McAvoy deserved an Oscar nomination for his portrayal of a troubled, hungry guy with multiple personalities.

Now, with the new Glass, those two movies collide for an epic conclusion to the trilogy.  While you could enjoy Glass without seeing the prior movies, you wouldn’t enjoy it nearly as much.

Willis and Jackson are back as David Dunn and Mr. Glass, and they’ve lost none of their magnetism or onscreen chemistry.  McAvoy, unbelievably, ups the ante by playing even more characters than he did in Split.

And as is the case with the best of Shyamalan’s movies, the director is always one or two steps ahead of the audience.  Comparisons to Hitchcock and Spielberg are very well deserved.

Make sure you watch Unbreakable and Split before seeing Glass, and trust me on this: you’ll be pouring a glass of wine (I had to) and thinking about this new film long after the lights go back up in that theatre.

Split is playing in theaters everywhere.