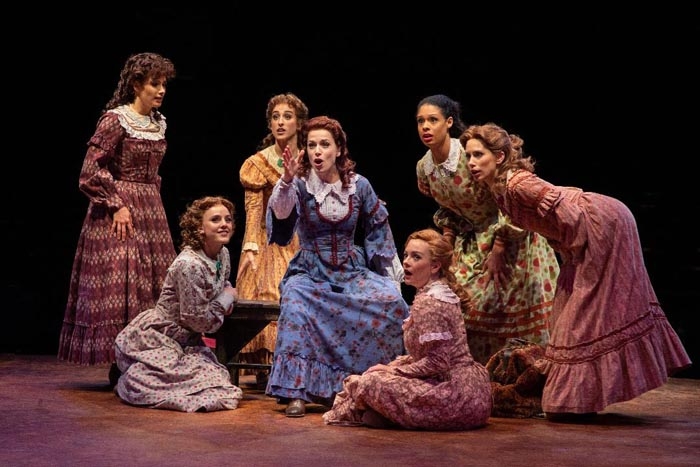 Featuring iconic choreography and a Tony-nominated score, Seven Brides for Seven Brothers tells the story of an assertive young bride living in the 1850s Oregon wilderness.  Her well-intentioned plan to marry off her six rowdy brothers-in-law goes horribly and hysterically wrong.

I walked into the Wells Fargo Pavilion for Tuesday night’s opening of Seven Brides for Seven Brothers not knowing much about the production.  I’ve not seen the legendary MGM film on which the play is based, and at the risk of having my LGBTQ Card revoked, I’ll confess to being relatively new to musical theater.  Walking in, I only knew two things for sure:  it was a musical, and there were at least 14 people in the production.

Just before the show’s well-earned intermission, I experienced a musical theatre “first”: I’d witnessed (and participated in!) a standing ovation for a dance number in a musical.  I’d watched singers pour their hearts out onstage and earn the adoration of everyone in the audience, but I’d never seen such a talented troupe perform so brilliantly that the entire audience leapt to their feet at the end of a single routine, as we did at the conclusion of the first act’s “Social Dance.”

That’s not to say that the singing throughout the show wasn’t exceptional, because it was.  In fact, one of the production’s vocal triumphs was the very next scene, during which actors Edward Watts, Paige Faure, and KC Fredericks beautifully harmonized during “Love Never Goes Away.”  It was so gorgeous, I almost forgot how exceptional the dancing and choreography were.

But you couldn’t.  Well, I couldn’t.  In fact, if this rollicking show has a down side, it’s the realization that the second act doesn’t have a production number that brought down the house like “Social Dance” did in the first.  If you’re a musical theater fan, it is a “must-see.”

I asked the production’s choreographer, Patti Colombo, about her work on the show, and how she could possibly have prepared a follow-up to the wonder of “Social Dance.”

“You can’t,” Colombo laughed during our EXCLUSIVE chat.  “Unless it’s ’Spring Dance’’s ballet but that’s a whole different thing.”

[Can I have my card back now?]

With Seven Brides for Seven Brothers, Broadway At Music Circus has done it again!

Look to THE HUB later this week for more of our EXCLUSIVE conversation with Seven Brides for Seven Brothers choreographer Patti Colombo.