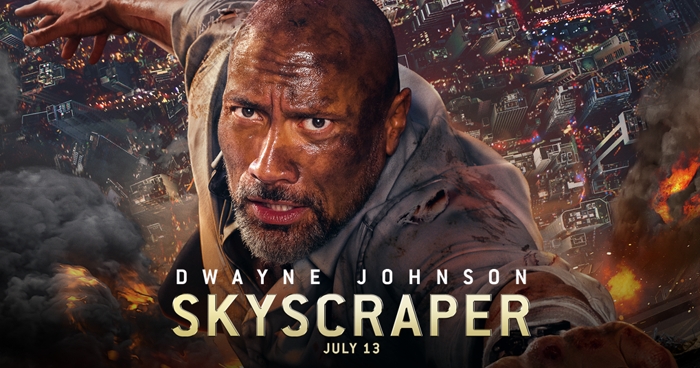 One of my kids used to love Dewayne Johnson, way back when the actor was just a lil ol’ WWE star. That girl smelled what The Rock was cookin’ long before I paid any attention to him.

It’s hard for anyone to ignore Johnson today.  I never thought I’d say these words, but Dewayne Johnson is a good actor.  Not a great one, but a good one, with the ability to transcend his material when he has to.

In a few of Skyscraper’s scenes, he had to.

Skyscraper is Johnson’s latest attempt to convince us that he is this generation’s Bruce Willis.  I chose that example deliberately, as this new film is Die Hard on steroids.  There’s a really big building — a skyscraper! — in this movie.  The hero’s wife is in danger.  There are a few villains with some really exaggerated accents.  And come hell or high, burning building, everyone’s going to be ok!

There are a few really thrilling scenes in Skyscraper.  There are even a few really thrilling scenes in Skyscraper that aren’t in the trailer.  And there are more than enough jokes — both intentional and otherwise — to make the movie worth the price of admission.  On the way home from the theatre, I stopped at Target for a roll of duct tape.  I may keep a roll in every room of my house from now on.  You may, too after you see the movie. 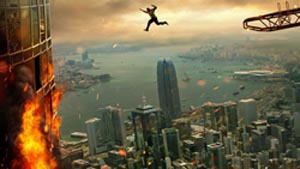 Johnson’s wasn’t the only solid performance in the film.  Neve Campbell plays very effectively against him, and the two actors who play his kids, McKenna Roberts and Noah Cottrell, more than hold their own in scenes with both the massive Johnson and the even more massive green screens.  The bad guys were both comically menacing and menacingly believable.

My only real gripe with Skyscraper is the obvious cash grab for the international box office, especially those crucial Asian markets.  Why couldn’t this skyscraper have been in New York?  Or LA?  Chicago?  Detroit?  Because Universal and Legendary Pictures wanted to do everything they could to ensure that the film did well overseas.

And it will.  In fact, it should do well everywhere.  Even with this year’s abundance of silver screen superheroes, I think there’s room for one more guy who can hold up a collapsing building with his bare hands.

Skyscraper is a fun, albeit formulaic summer action romp.  Again, a good actor transcends his material.  Johnson had his work cut out for him with this flick, but he rose to the challenge.  And then he took off his prosthetic left leg and beat the crap out of somebody.