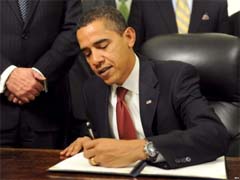 The White House has just announced that President Obama plans to sign an executive order to protect 16 million Americans against workplace discrimination based on sexual orientation and gender identity.

The mandate affects Federal contractors, which employ more than 20 percent of the American workforce.

This major show of support from the president comes as a bit of a surprise, as just a few months ago the White House cited congress’ stalemated Employment Nondiscrimination Act (ENDA) as the reason an executive order to the same effect would be “redundant.”