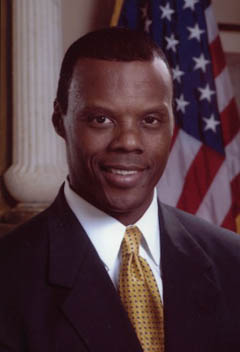 Will California viewers be able to watch the Black Television News Channel (BTNC) when it debuts next fall? Along with his partner, veteran Florida television veteran Robert Brillante, former U.S. congressman J.C. Watts has been working tirelessly for six years to ensure that the network he founded in 2008 will be available to the widest possible audience. With a deal already in place at Dish Network, BTNC is eyeing a deal with Comcast that would position the Tallahassee Fla.-based channel to send its signal into the media giant’s top ten U.S. markets by February 2016. As BTNC moves quickly toward its official debut next fall, Watts sat down with California Black Media to discuss the stakes for the nation’s first Black-oriented news channel.

How important is California viewership to BTNC?

In my opinion, it would be crazy to have a news operation and not have the state of California or Los Angeles represented. You can almost look at the places around the country where you have an ethnic minority mayor. Those markets are going to be pretty critical to us.

Why is it important to have a news channel directed toward African-American viewers?

When Trayvon Martin happened, where did the community go? When Ferguson, Mo. happened, where do the community go? We can go to the radio, but we can’t go to the TV. It’s either CNN, MSNBC or Fox News. And CNN, MSNBC, and Fox News … they have black faces that they put on TV, but those black faces are not usually talking about African-American content. When people on MSNBC, CNN, or Fox News talk about Thanksgiving dinner, and what they are going to have for dessert, they talk about pumpkin pie. But most people in the African-American community don’t eat pumpkin pie; we eat sweet potato pie. It’s culturally specific to our community.

Why is Comcast’s merger with Time Warner important to BTNC?

How will BTNC cover black issues that have garnered attention in the national spotlight?

Is BTNC something the African-Americans in the United States need?

How is the black community underserved?

There are over a 120 Hispanic stations and three news channels. The African-American community has [very few]. Most of the program on these channels is reprogramming which means it’s pre-watched. They have no news channels.

What type of news programming will be shown on BTNC?

We will have 14 to 16 hours per day of original programing. From nine in the morning to nine at night, we will have personality-driven shows, news magazine shows. “Good Morning America”-type shows. We come in with breaking news. We will take our top shows and re-run them at about nine or ten at night, then overnight will be religious broadcasting.

Can BTNC be successful?

We feel like we can be extremely successful, because we are targeting an underserved community.