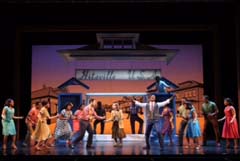 I’ll admit to having had mixed feelings as the lights dimmed just prior to curtain last night at San Francisco’s Orpheum Theatre. Having been born and raised just a stone’s throw from Motown’s historic studios in Detroit, I was thrilled to be seeing Motown The Musical. I was also braced for disappointment.  After all, how could Motown founder Berry Gordy, director Charles Randolph-Wright, and a group of young people who weren’t even born during Motown’s heyday possibly recreate the magic?

Motown The Musical is an absolute stunner.  The production’s creative team have assembled an ensemble that captures the essence of icons like Stevie Wonder, Rick James, The Temptations, Teena Marie, The Marvelettes, Mary Wells, The Four Tops, and others in a rollicking two hour and 45 minute show that left last night’s standing-room-only crowd screaming and begging for more.

With performers as iconic as Motown’s, it would be easy to slip into parodies of them.  Motown The Musical‘s brilliant cast manages to embody the spirits of Motown’s stars without mocking them.

With an ensemble this talented, I almost hate to mention individuals, but as the old gospel tune goes, I just can’t keep it to myself.  Allison Semmes’ portrayal of Diana Ross is mesmerizing.  She’s effective as an adolescent Ross clamoring for a chance at stardom, and captivating as the full-blown diva we all know, practically floating through the audience on “Reach Out And Touch”.  Semmes’ Ross was so effective that she actually got the entire audience to join hands, sway back and forth, and sing with her, a signature Ross concert highlight.  In addition to her singing, Semmes chemistry with Clifton Oliver, as Berry Gordy, was electric.

Speaking of Oliver, the phenom delivered a stunning version of “To Be Loved” early on, and later left it all on stage with “Can I Close The Door?”, one of the few original tunes written for the play.  Oliver & Semmes’ version of “You’re All I Need To Get By” is on par with Gaye’s and Tammi Terrell’s original.

Other standouts were Jarran Muse as Marvin Gaye (who left women in the audience literally screaming as he performed Gaye’s signature gyrations), Martina Sykes as Mary Wells, Nicholas Christopher as Smokey Robinson, Rashad Nailer as Jackie Wilson, and young Reed L. Shannon who delivered a spot on performance of Michael Jackson’s “Who’s Loving You”.  Just as a prepubescent King Of Pop practically stole the song from Smokey Robinson in 1969, Shannon almost stole the show from his co-stars last night. 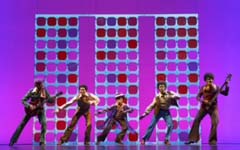 I was impressed with Motown The Musical‘s combination of over 60 classic Motown songs with serious, tense dialogue (MLK’s and Kennedy’s assassinations, the Motortown Review’s stops in southern segregated venues, etc.), entwined with threads of humor that diffused the moments depicted.  The technique was reflective of how Motown’s music had done the same 50 years ago.

The show includes a hysterical, surprisingly candid scene between Gordy and Ross, during which the audience sees the forceful Gordy in a rare moment of powerlessness. You will never hear The Supremes’ “I Hear A Symphony” the same way again.

Last night’s audience got a special treat when a visibly moved Berry Gordy took the stage during the curtain call and graciously thanked the audience and music fans worldwide for “making my dream come true.”  The Motown founder was also amazingly spry, dancing to Stevie Wonder’s “I Wish” and displaying a level of energy that belied his 84 years.

If you’ve been touched by the music at all over the last 50 years, don’t miss this show.

Motown The Musical is playing at the Orpheum Theatre in San Francisco thru September 28.  Tickets are available at shnsf.com

Michael P. Coleman is a Detroit-born, Sacramento-based freelance writer and a self-proclaimed super freak.  Come see about him at michaelpcoleman.com or on Twitter: @ColemanMichaelP