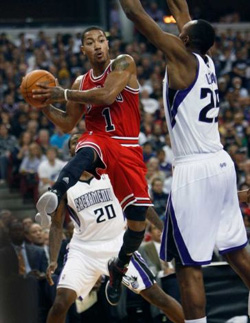 SACRAMENTO, CA (12/29/11) – The ultra buzz of the Chicago Bulls flowed through the air in the Power Balance Pavilion as Derrick Rose made an early season appearance and showed why he’s the reigning MVP with an easy 108-98 win over the Sacramento Kings.

King’s head Paul Westphal was extremely frustrated with his team’s performance and lack of transition defensive effort against the Bulls who were able to covert easy lay-ups as the Kings’ players made a lackadaisical effort and allowed Rose to have his way on the court in limited minutes due to foul trouble.

Bulls head coach Tom Thibodeau was impressed with the team’s performance and was happy to see Rose return to form after a struggling performance against the Golden State Warriors on Dec 28.

“He was in attack mode right from the start of the game and that’s usually who he is,” Thibodeau said. “I thought he set the tone at both ends.”

Rose was the epitome of “lighting in a bottle” in Sacramento and posted 19 points on 7-14 shooting to go along with eight assists in limited minutes due to foul trouble, but he set the tempo and the game’s pace which resulted in 16 points apiece for Carlos Boozer and Richard “Rip” Hamilton.

DeMarcus Cousins came out to play as he set the defensive tempo on consecutive possessions with a block shot and a steal to start the game, but the Kings’ offensive struggles began as the Bulls opened with a 12-5 lead with 7:21 left to play in the first quarter and forced Kings’ Coach Westphal into an early time-out.

The Kings missed their next seven shots before Marcus Thornton’s 17-foot jumper stopped the bleeding, but the Bulls’ tempo never allowed the Kings to keep pace and Westphal went to first round draft pick Jimmer Fredette with 2:51 in the first quarter in an attempt to spark some offense as the Kings fell behind 26-13.

Fredette responded with a 10-foot step back jumper and led the Kings offense to a 11-4 run that allowed the Kings to close the gap to 30-24 at the end of the first quarter.

The Bulls went on to shoot 56.5 percent in the first half, and the Kings shot 38.1 percent but still found a way to stay in the game by trailing by just 60-53 heading into the break.

The Kings opened the half with six straight points. They were in the game 60-62 and the Power Balance Pavilion scoreboard mimicked that of Candlestick Park’s with a power outage that lasted roughly two minutes.

The Bulls responded with six straight points of their own, including a slashing basket by Rose and back-to-back baskets by Hamilton to push the lead back up 68-62 and look like they would take control of the game, however, the activeness of Cousins sparked the Kings as he nailed a 14-foot jumper and brought the Kings back to within 74-73 with five minutes left in the third quarter.

That would be as close as the Kings would come back as the defensive struggles continued and a frustrated Westphal let it be known that the team’s performance was simply unacceptable.

“It was pathetic the way we got back on defense,” Westphal lamented. “If we did that and made our free throws, we’d win the game. That says a lot for our team, but it also says a lot that we need to do and just can’t talk about it.”

Marcus Thornton led the Kings with 20 points and four of his teammates reached double figures in scoring, but the Kings’ patience, decision-making and shot selections down the stretch never afforded them the opportunity to gain control of the lead in the second half.

The Kings will look to get back on the right track as they host the New York Knicks on Dec. 31 at Power Balance Pavilion.