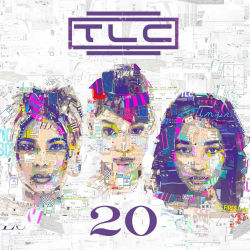 TLC, reportedly the best selling female group in music history, has recently revealed the title and track listing for their latest collection, which will be released on October 15, 2013, by LaFace/Epic Records.

“20” is reportedly a nod to the group’s 20-year-plus career and will feature TLC’s biggest hits — including their four No. 1 singles “Creep,” “Waterfalls,” “No Scrubs” and “Unpretty” — plus a new track written by Ne-Yo, “Meant to Be.” The latter will be heard during the closing credits of the upcoming VH1 original movie, “CrazySexyCool: The TLC Story,” which inspired the track-listing for “20.”

The film, which stars Keke Palmer (Akeela & The Bee) as Chilli, Drew Sidora (Step Up) as Tionne “T-Boz” Watkins, and Lil Mama (America’s Best Dance Crew) as Lisa “Left Eye” Lopez, chronicles TLC’s humble beginnings in Atlanta and unprecedented rise to fame in the ’90s. It will premiere on VH1 on October 21, 2013.

Chilli and T-Boz will celebrate the release of “20” and “CrazySexyCool: The TLC Story” with a series of television appearances, including “Good Morning America” on October 15, “The View” on October 16, and “The Wendy Williams Show” on October 17.