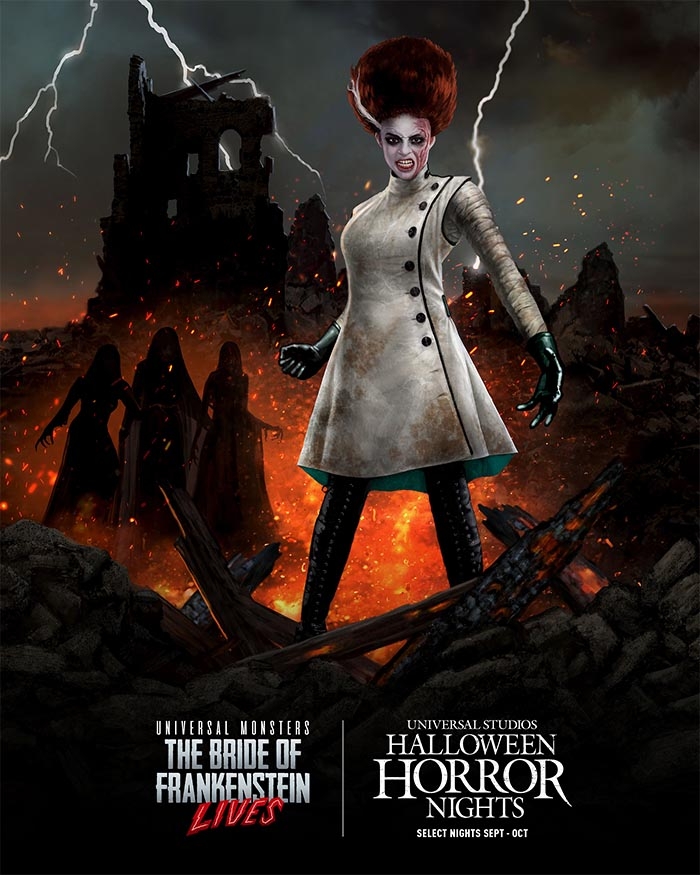 Orlando, Fla., Universal City, CA (July 15, 2021) – This fall, Universal Studios’ “Halloween Horror Nights” returns to Universal Orlando Resort and Universal Studios Hollywood, unleashing some of the most nefarious names in horror to prey upon guests. Classic films that have influenced the horror genre will come to life in two of the event’s disturbingly-real haunted mazes – prepare for the return of the legendary Leatherface in “The Texas Chainsaw Massacre” and the resurrection of one of Universal Pictures’ most iconic monsters – the Bride of Frankenstein – in “Universal Monsters: The Bride of Frankenstein Lives.”

Plus, guests at Universal Orlando’s “Halloween Horror Nights” will face another pop culture and horror legend as they brave this year’s event. The destination previously revealed the first haunted house of the season featuring the ‘ghost with the most,’ “Beetlejuice,” based on Warner Bros. Pictures and Tim Burton’s Academy Award-winning horror-fantasy film.

Stay tuned as additional details about “Halloween Horror Nights” at both Universal Orlando Resort and Universal Studios Hollywood will be revealed soon.

The “Halloween Horror Nights” events begin on Friday, September 3 in Orlando and Thursday, September 9 in Hollywood – and both events run select nights through Sunday, October 31. Select tickets and vacation packages are now on sale for “Halloween Horror Nights” at Universal Orlando Resort; tickets for the event at Universal Studios Hollywood will be available soon. Due to popular demand, event nights are expected to sell out. For more information and to purchase tickets, visit www.HalloweenHorrorNights.com.

For more than 30 years, Universal Orlando has immersed guests in amazing “woah” moments that free them from the stress of their worlds. Across the award-winning destination, they can let go and live in the moment with those they care about most as they embark on incredible theme park adventures, like causing mischief with the Minions from Illumination’s “Despicable Me,” coming face-to-face with ferocious dinosaurs in Jurassic Park, walking the corridors of Hogwarts castle in The Wizarding World of Harry Potter and so much more.

Universal Orlando is home to three epic theme parks that feature some of the world’s most exciting and innovative experiences, including Universal’s Islands of Adventure – named the #1 Amusement Park in the World for five years in a row by TripAdvisor Travelers’ Choice; Universal Studios Florida – home to the most technologically-advanced stunt show yet, The Bourne Stuntacular; and Universal’s Volcano Bay – a tropical oasis like no other that features an actual beach right in the middle of Orlando.

Universal Studios Hollywood/Universal CityWalk Hollywood and Universal Orlando Resort Health and Safety Guidelines
Please note the CDC advises that older adults and people of any age who have serious underlying medical conditions might be at higher risk for severe illness from COVID-19. Guests should evaluate their risk in determining whether to attend. People who show no symptoms can spread COVID-19 if they are infected, any interaction with the general public poses an elevated risk of being exposed to COVID-19, and Universal cannot guarantee that guests will not be exposed during their visit. Before visiting, click here to review the safety guidelines for Universal Studios Hollywood and click here to review the safety guidelines for Universal Orlando Resort.