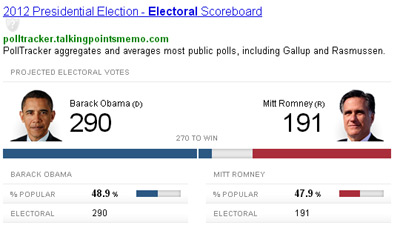 Some interesting comments, remarks, and opinions I noted while watching Anderson Cooper 360 on CNN this pre-election evening, Mon-11/5.  There were 8 CNN contributors who participated in this talk show panel which included Former White House Adviser Van Jones to President Barack Obama.  I’m not by any means a political analyst or a political writer but just wanted to share some tidbits/observations with you and some new things I learned with taking raw notes to understand some of what is going on behind the political scene of the electoral college, surrogates, provisional ballots, swing states, who really controls government, and more:

Glimpse of the predicted Electoral Scoreboard as taken from http://core.talkingpointsmemo.com/election/scoreboard

Get out your calculator. In one sense, Electoral College math is simple: Add up states’ electoral votes until one presidential candidate’s total is 270 or greater. In another sense, it is complex because there are many ways for each candidate to achieve that sum — and even some ways for neither to reach 270. Based on polling data aggregated by the website Realclearpolitics, President Obama has 201 electoral votes safely in the bank. Republican challenger Mitt Romney has 191. The remaining 146 electoral votes are spread among 11 battleground states where recent polling averages show the candidates separated by fewer than 5 percentage points. It is here that the election will be decided. http://www.boston.com/politicalintelligence/2012/11/05/electoral-college-provides-many-paths/U30K45e3wcwIpxiRx3g6kK/story.html

Did you know that President Obama is playing basketball on Election Day and this is tradition?

Senior citizens are a shifting group

This election is noticeably different than 2008 election

At the outcome of this election there seems there will be more of a sense of relief vs. celebration (for either side who wins)

1 million people in the NY region still without power; will Superstorm Sandy complicate voting; can voters focus on election?

Remember what happened in in 2000…this is now critical for ; is the next ? Beware of provisional ballots which is very common in Ohio (e.g. – this is when someone who has left their I.D., can still vote but has to return to show his I.D.; provisional ballots are considered a nightmare as post election day, we must wait 10 days until final count). A provisional ballot is used to record a vote when there are questions in regards to a given  voter’s eligibility. Why a 10-day wait? By law, local election boards in are given up to 10 days to determine provisional ballot eligibility. Officials want to make sure there is no double-dipping — so that those who vote early by mail do not then show up on Election Day in person and try to vote again. Discrepancies, such as checking recent address or name changes, could complicate a process, where every vote is considered in play. http://edition.cnn.com/2012/11/05/politics/ohio-ballots/index.html?hpt=po_c2

Van Jones noted that we have yet to hear from young urban groups that could show up (maybe more than we think) at the voting polls tomorrow … e.g. – Vote Mob and Hoodie Vote (http://allhandsondeck.net/vote-in-your-hoodie/ and http://hoodievote.org/)

It has been stated generally that this race has been all about jobs and the economy…not really, it has been about:

There is a big fight for winning the critical state of

Will the Jewish vote be less in ?

In the last 2 weeks, 9 states: 1) Florida, 2) Virginia, 3) Ohio, 4) Iowa, 5) Colorado, 6) Michigan, 7) North Carolina, 8) Pennsylvania, and 9) Wisconsin have gotten the most attention of Biden, Obama, Ryan, Romney and their respective serrugates.  CLICK HERE to see more of what A-list of surrogates are with and have been with Presidential Obama.

Team Obama strategy on Election Day is primarily concentrating on their ground campaign with regards to getting voters to the polls.

Republicans are not taking anything for granted; nothing is for sure.

This year’s election you just don’t know vs. other elections we knew who was going to win.

He (President Obama) could at least do something remote … T.V.

As Michelle Obama takes the stage in , the crowd chants, “We Love Michelle!” and she states: “And, I love you from the bottom of my heart.” And she goes on to state so eloquently, “This is the final event of my husband’s campaign, pretty emotional event for me as truly this is where it all began.”  And, in closing her speech, she mentioned, “…for 4 years Barack has been fighting for us to be able to have the American Dream” and also stated, “Our family has been truly blessed from all the prayers we have received from around country.” – “We can not turn back now…we must move the country FORWARD!” An impeccable, humble, free-flowing and tender speech with sincere smiles delivered by an incredible wife, mother, and First Lady who then closes with introducing her husband, President Barack Obama who takes the stage.

I look forward to voting in person tomorrow and I must say that 2012 Election Day will truly be exciting, interesting, and relief and a celebration of victory!!!