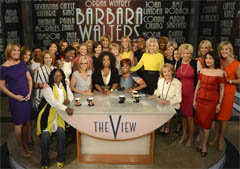 What a sendoff for today.

, former secretary of State , and a parade of her TV newswomen heirs surprised Walters as the news icon taped her final edition of The View to end a five-decade career on television.

Actor , a longtime friend and frequent subject of Walters’ interviews, also dropped by for the tribute, which airs Friday on ABC at 11 a.m. ET.