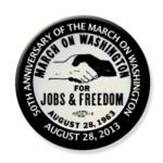 A “Report-Back Session” featuring local activists will be held in Sacramento on September 29 will commemorate the 50 year anniversary of the March on Washington.

The event will take place Sunday, September 29, from 2-5pm at Stockton Boulevard Partnership, 5625 Stockton Blvd., (in the Fruitridge Shopping Center) in Sacramento.